Today I’ve got some more book recommendations for you!

I got to read two ARCs since the last book rec episode and they were both amazing! 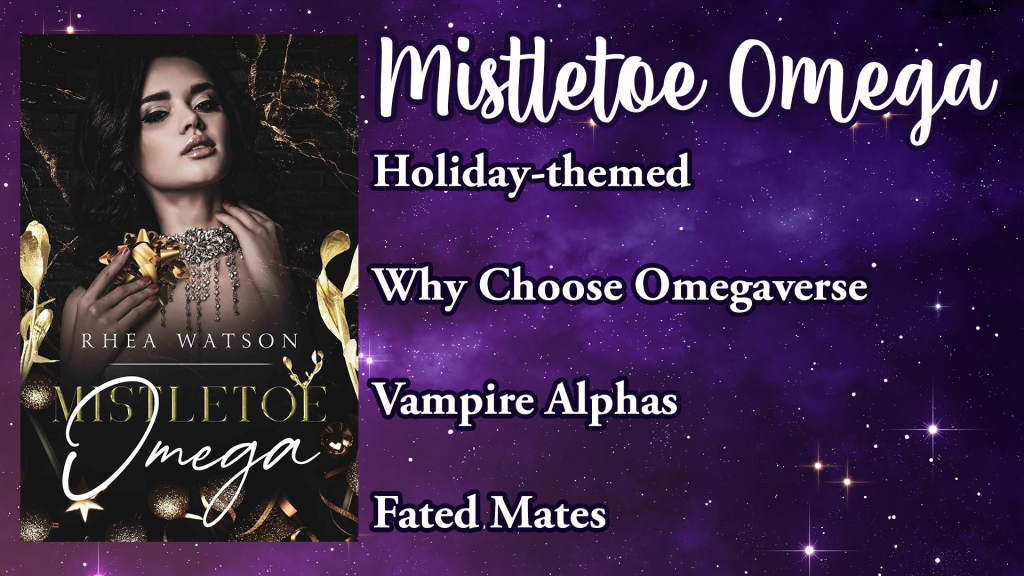 First up is Mistletoe Omega by Rhea Watson. Although Rhea has a plethora of books out, this is her first omegaverse and she really dropped into that subgenre with a bang. One thing I particularly love is that it’s a high fantasy with a brand new world and piles of supernatural beings in the story besides the alphas and omegas. There are alpha vampires! Our FMC Holly has been dealt a pretty terrible hand in life but as soon as her potential alphas get over their existential crisis they’re going to make sure things get a lot better for her.

Blurb: On a snowy winter’s eve, three vampire alphas walk into Club Mistletoe expecting a night of frivolous fun. Gifted with an omega by their crime lord boss, Ambrose, Kane, and Laszlo intend to make the most of it before they head home, their business on Mistletoe Isle concluded.

However, from the first bite, the moment Holly’s blood hits their tongues, they realize that the omega desperate for her freedom is so much more than a fling at some pay-to-play club.

The cruelest joke the goddess ever made: allowing for a fated bond between a thing of beauty, a creature of life… and three ruthless monsters of death.

Mistletoe Omega is a holiday novella that came out on December 15th. Mind the content warnings, as always, but if you like fated mates, growly alphas, and a dark world with antiheroes worshipping their lady, then you should check out Mistletoe Omega too!

Deal with the Devil by Bex Deveau 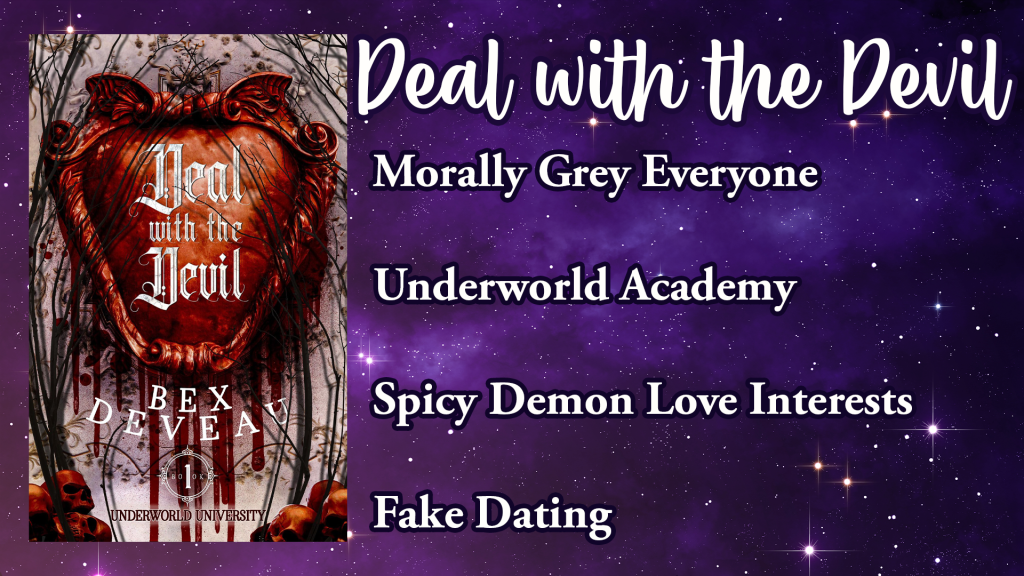 The other ARC I read was for Deal with the Devil by Bex Deveau. This book is Bex’s debut novel and can I just say that I’m very excited for the entirety of the series.

There’s a lot about this book that I loved. The world building was unique and clever, the plot was engaging, and I fell in love with character after character. There’s fake dating, stabby ladies, eternal torture via magic math class, literally what’s not to love?

Olivia is the heir to a mafia family and as you can imagine, her life is not a particularly safe one. After she gets offed she finds herself at a university in hell with a chance to escape an afterlife of torture. Also as you can imagine, being a part of a mafia family makes her rather perfectly suited to befriending demons and others that ended up in the same position as her. All the characters are so great. Poison probably takes the top spot for me. They’re just so flipping cute and I love them so much. You’re going to love them too, just wait. Every one of the love interests are delightful in their own way, from the grumpypants pit fighter, to the demon prince with a bit of a stick up his butt, to the compulsive gambler with a big mouth, to the secretive and quiet giant, to my personal fave, the enby sex demon that lights up my life every time they’re on the page.

You have been selected to attend Underworld University, the most prestigious training ground for demons in Pandemonium. During your studies you’ll have the unique opportunity to wipe your soul’s slate clean.

Your demonic classmates are using your chance at a peaceful afterlife to practice making soul contracts with humans. My life wasn’t perfect, but it was mine. Despite losing my parents as a kid and being taken in by my uncle I was raised like every other mob princess, spoiled and fiercely protective of my family.

Sure, I have a few ideas about why I ended up in hell: 1. Murdering my ex-boyfriend, Kallum. 2. I don’t know, jaywalking, I guess.

Getting distracted by whatever game my irresistible demonic classmates are playing will definitely land me in hot water—and their beds. But when someone from my past threatens my place at the academy, I’ll need their help more than I realize. Are you ready to make a deal?

There is a cliffhanger at the end of this book, but it’s honestly not that bad. It’s the first of a five book series and you’re going to love it. This title releases on December 22 so there’s still time to preorder it! 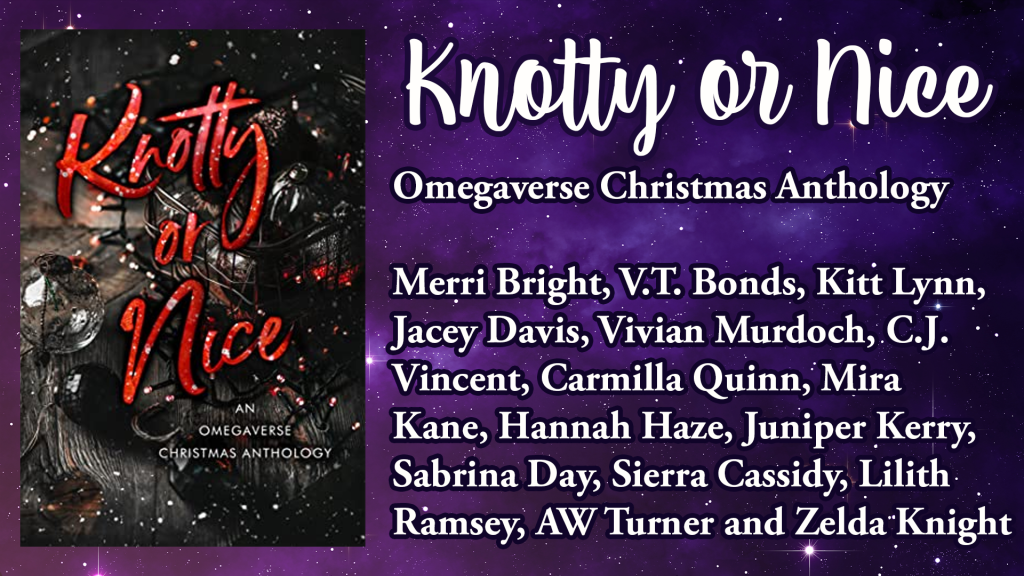 This is your reminder that the Knotty or Nice Anthology, a limited edition collection of holiday omegaverse stories is up on KU to fulfill all your reading desires. 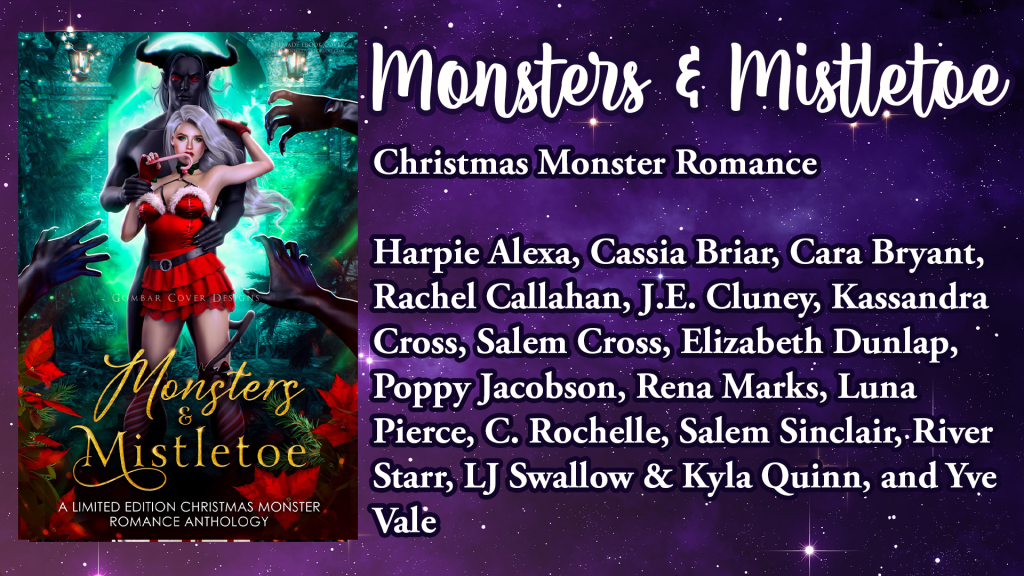 This title came out December 1 and is a monster-themed Christmas anthology.

Blurb: Hot chocolate, snowflakes, jingling bells, and… monsters? That’s what Christmas has in store for you this year! Add a little spice to your holiday festivities by diving into this collection of monster-loving heroines who find love in the most unusual of places. 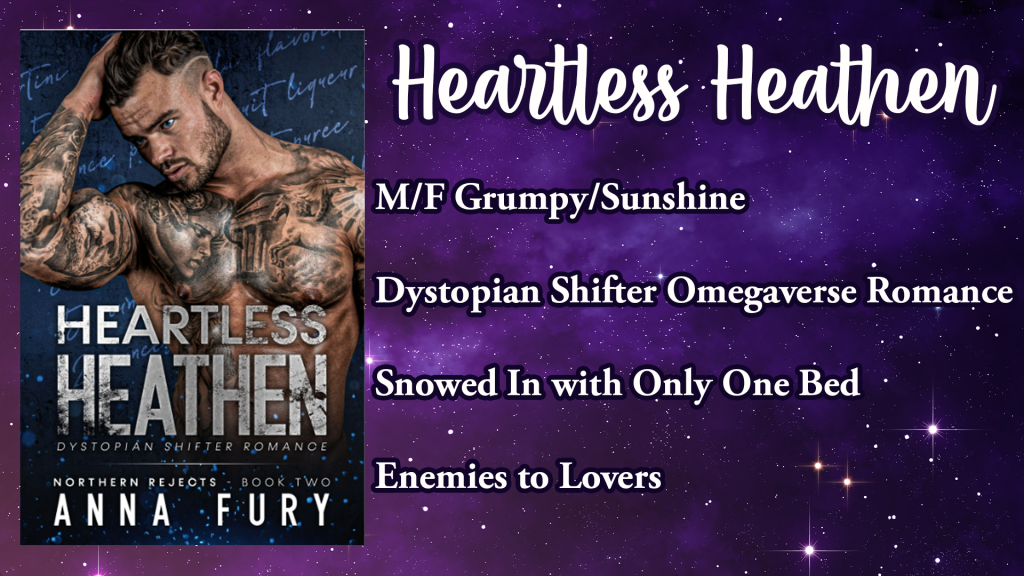 This title came out December 1 and is a dystopian M/F shifter omegaverse romance with  Grumpy/Sunshine enemies to lovers, snowed in trope and only one bed.

TITAN: I was fine, happy even, before Luna Brooks showed up in town. I run a successful bar, am part of the best pack there is, and have great friends. Everything about Luna irritates me. She’s too bubbly, too happy, too mouthy…too gorgeous. I’d ignore her, but we’re forced to work together for the good of the pack. We just need to get one simple project done. But the more time I spend in the sunny Cali girl’s presence, the darker my thoughts turn. She’s not my type—I prefer obedience—and she’s not even staying in Ayas long-term. Yet every time she opens that pouty mouth to snark at me, I think about what she really needs—punishment. And God help me, I want to be the man to dish it out.

LUNA: If I had a dollar for every time Titan scowls at me, I’d be a millionaire. The pack enforcer is crazy hot, but he’s got the personality of a wet rag. Still, my bestie asked me to work with him for the good of the family. For her, I can put the enemies-to-enemies vibe aside. Color me shocked when I discover Titan has a kind streak a mile wide, especially for the unfortunate women stuck in another local pack. If we can put our differences aside, we’ll help not only our pack but those other women too. The only question is, will we survive each other long enough to make it happen?

HEARTLESS HEATHEN is the second book in the Northern Rejects series and features a grumpy pack enforcer trying to tame a wild Cali girl. 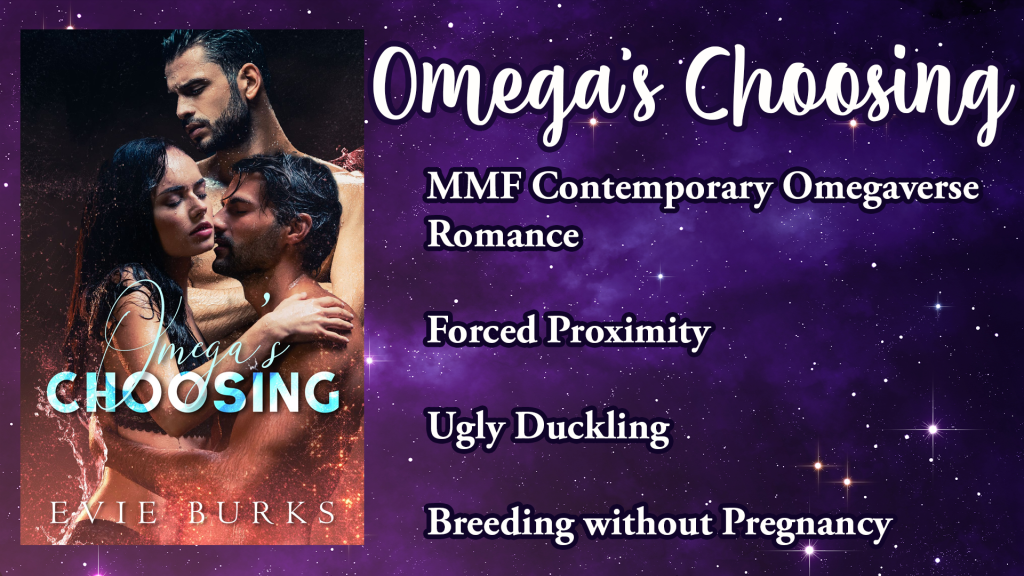 This title came out December 2 and is an MMF contemporary omegaverse romance with forced proximity, ugly duckling, and breeding without pregnancy.

One omega for two alphas. What could possibly go wrong? Adelyn has known from a young age that she would have to follow the guidelines laid out by the government… but dreaming about alphas and seeing them in real life are two very different things. In real life they’re hard, dangerous, and only interested in one thing, her. Claiming her. Breeding her. Making her theirs. She’s seen what happens to omegas who disobey the rules. She’s not going to be one of them. Bash, a hardened alpha construction worker, has been skipped over for years, so he’s skeptical when he’s chosen by Adelyn, but it’s not pity that he sees in her eyes. No, it’s desire. Sharing her will be a monstrous task, but this alpha is all in. He won’t let his one chance to get off this island slip away. Rhylon, a new alpha, doesn’t know what to expect when he arrives at Alpha Island. It certainly wasn’t making eyes at a cute omega on the transport or being chosen by said omega. With danger lurking just around the corner, these two alphas must fight their instincts and work together to protect their omega at all costs. Will they manage to do the impossible and save her, or will they lose her and their chance at happiness forever?

Hired for Research by Leann Ryans 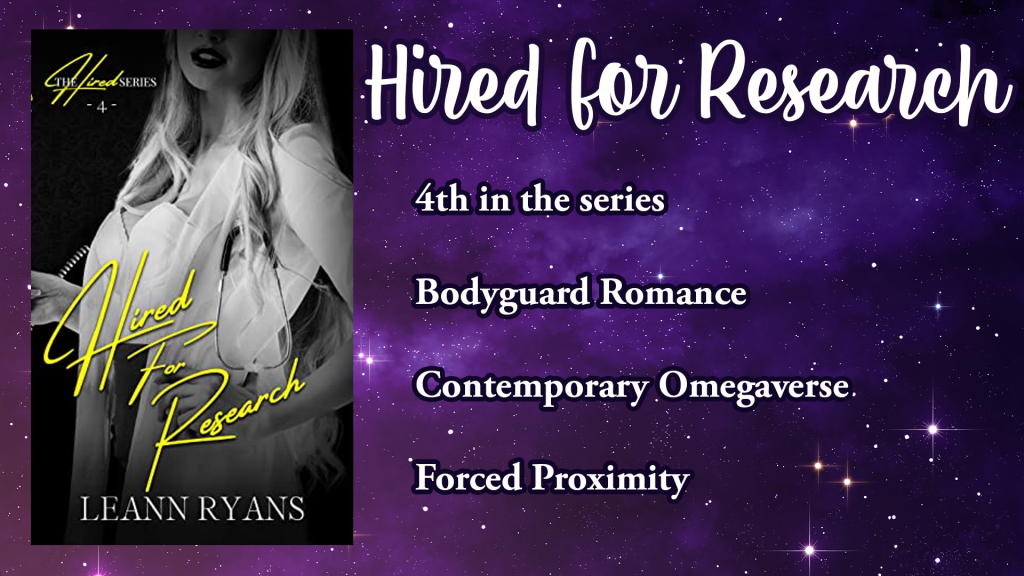 This title came out December 4 and is an MF contemporary omegaverse bodyguard romance with forced proximity.

Blurb: With growing attention on Eden, Evelyn’s curiosity about alphas has reached its peak. Are they really as dangerous as they’ve been claimed to be? Are the laws ruling them too harsh, put in place by dynamics scared of nothing more than possibilities? The only way to know for sure is to hire one herself, but will the alpha Hired for Research reveal the secrets of his dynamic or hers? 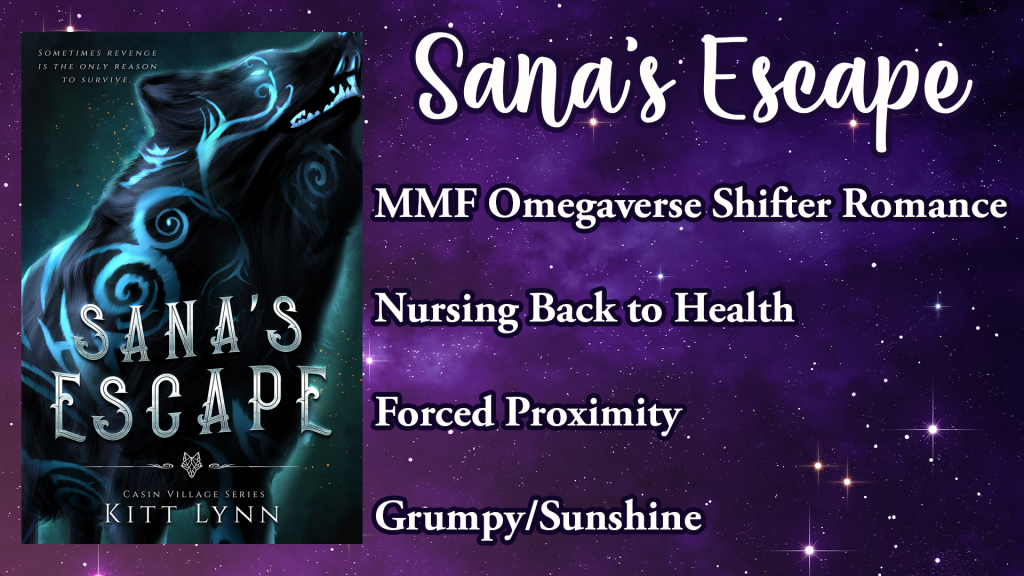 This title came out December 9 and is an MMF omegaverse shifter romance with revenge, nursing back to health, forced proximity, and grumpy/sunshine.

Blurb: Sometimes revenge is the only reason to survive.

Forced to mate a wolf I don’t know to appease my father? I don’t fucking think so.

My intention wasn’t to run, at least not without my sister, but I couldn’t wait, not after what happened. So now I’m trying like hell to escape my father’s guards, in lands I don’t know, with nothing but the clothes on my back. I had a plan, but now I’m just hoping to survive.

Scared and injured, I wake in the den of two wolves, an infuriating alpha and his mate, a sweet, calming omega. As much as my wolf longs to stay with them, I must return home. I need to save my sister from the fate I escaped and make them pay for what they did.

I will exact my pound of flesh.

Deal with the Devil by Bex Deveau https://books2read.com/deal-w-devil

Knotty or Nice Christmas Anthology – (my story is based on Nicky and the Pack) – https://books2read.com/knotty-or-nice